Daniel Greenwald directed  the short film Western/Comedy “A Few Rubber Bands More”, which was showcased at the Los Angeles FEEDBACK Film Festival in December 2016. The film received rave reviews from the audience and was awarded “Best Cinematography” at the festival.

Daniel Greenwald: Film making was a passion of mine since childhood and I can remember being most impressed by movies that feature dynamic cinematography on the backdrop of natural scenery. I was eager to challenge myself by shooting something that used the cinematography as a story telling element. What I like about A Few Rubber Bands More is that it uses the over the top shots and camera movements not just for the sake of trying to impress, but to create a discrepancy between the seriousness of the visuals and the ridiculousness of what is actually taking place. This film represented an opportunity for me to grow as a film maker by shooting some action for the first time as well as attempting to create some epic shots.

MT: From the idea to the finished product, how long did it take you to make this film?

DG: I originally had the image of a stand off with rubber bands a while back but let it sit in the back of my mind until I had the means to actually shoot it. Between actually writing the short to shooting there were about three weeks during which I wrote my shot list and found actors and crew. Filming took half a day, and then editing and scoring took another few weeks. All in all the project took about three months to produce.

MT: How would you describe your short film in two words?

DG: As this film represented many firsts for me, I found it most difficult to maintain continuity once all three characters moved away from one another. Although this is rather basic, there was a moment when I was filming each character in different places, moving in different directions, and, as I had never done that before, it was hard for me to clearly conceptualize how to shoot them in a way which allows the audience to understand each of their positions in space. I had to stop and consider my shots carefully while racing the setting sun. At the end of the day I feel that I learned a lot about showing a character’s space.

MT: What were your initial reactions when watching the Los Angeles audience talking about your film in the feedback video?

DG: Fortunately I had the opportunity to attend the festival and experience it in person. I remember feeling both excited and nervous about what people would say. I was so relieved when I actually heard people laugh while the short was playing. The first person to speak seemed very critical of the exaggerated and extended action. Although I respected his opinion, I was nervous that the reviews would be negative. After that however, people remarked that they enjoyed the subtle humor in the action and that gave me more confidence that the nuance written into the script had come across on film. I very much enjoyed hearing people’s reactions and seeing what stood out to people, good or bad. The discussion made this an even more educational experience for me.

DG: I was in my college apartment and procrastinating very successfully while listening to music from a spaghetti western by Ennio Morricone. The image of two men in a Mexican stand off shooting each other with deadly rubber bands came to mind, I am not really sure why. When I later sat down to write a script, it turned into a little bit more than just a shoot out with the short character exposition seen in the opening.

MT: What film have you seen most in your life?

DG: I have probably seen The Lord of the Rings more than any other movie; most likely the third one but the trilogy in general. 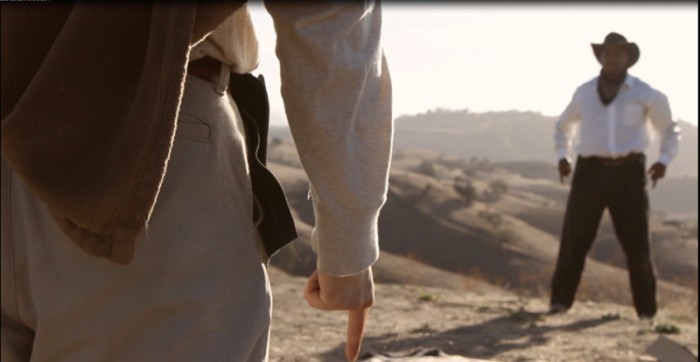