Teddy Cecil directed  the short film Sci-Fi/Thriller “HELIO”, which was showcased at the Los Angeles FEEDBACK Film Festival in December 2016. The film received rave reviews from the audience and was awarded “Best Cinematography” at the festival.

Teddy Cecil: There are a lot of stories I’ve been wanting to tell, but I chose to make Helio my first sincere foray into directing because I felt it was the most challenging. I shot the film when I was 25, and was afraid that I wouldn’t have an opportunity to make a film like this again so it was important that I tried to make something that didn’t feel limited in scope or story because it was a short film. I was aiming to tell a full narrative that felt like something you could watch on the big screen and didn’t leave you at all unsatisfied. At least that was the goal – whether or not it was something we pulled off is up to the viewer! But everyday I was faced with obstacles that had the potential to end the production, so knowing my motivation was key to overcoming all the problems and completing the long and ardurous process that was the making of this film.

MT: From the idea to the finished product, how long did it take you to make this film?

TC: The whole thing took me about three years to complete from concept to the film’s first screening. I definitely did NOT expect it to take that long when I went into the production. The majority of our time was put into the post-production process due to the fact that we had almost 150 shots with visual effects in them. Some of the shots had over 30 versions that we worked on before they were deemed “completed.” Since we were an independent production, we had incredibly limited resources for what we were trying to pull off – most people said it was an impossible task for us to complete a film like this with what we had – but all that meant was we had to put in more time, as opposed to more resources. There were only a few of us that worked through the entirety of the post-production process so it was a lot of work we each had to do.

MT: How would you describe your short film in two words?

TC: Another great question as we had many obstacles. Obviously, the VFX was the biggest single hurdle we had to overcome as a team – especially since this was untested waters for the majority of the cast and crew. But overall, I would actually say that for me it was not losing sight of what we were trying to do over the course of such a long production. It’s easy to lose hope and get depressed when things become so intensely challenging. The other big challenge was definitely the limited money we had for what we needed to do. But when is that not the case for independent filmmakers???

MT: What were your initial reactions when watching the Los Angeles audience talking about your film in the feedback video?

TC: Honestly, I was thrilled. I never know what to expect from people when they’re about comment on the film and it’s an incredibly anxiety-producing process. But the feedback was fair and helpful and also made me feel like a lot of the work we put into the production didn’t go unnoticed! Which is always exciting because, at the end of the day, so much of the work we all put into the production is to achieve a response from the viewer. And knowing what that response ended up being is crucial to our development as artists.

TC: The idea initially came out of a conversation I was having with a friend, then it developed further with other things I was influenced by at the time. It was a process developing this story and world; there was very much a back and forth between coming up with a narrative and figuring out how to execute it with the world I wanted to create. For example, I was living in downtown LA at the time, which is where we made the film, and I was inspired to to incorporate the skyline. That then helped develop part of the film where a rooftop chase ensues and our protagonist jumps from building to building with hostiles racing after him. Originally, I was just thinking about the project as a feature film, but soon decided to take the climax from that longer story and redress it to work as a short film. All of these elements came together and the result is the short film Helio.

MT: What film have you seen most in your life?

TC: Another exciting question! So much more interesting than picking a favorite film – a task I personally hate. So when I’m asked a question that’s much more objective and straight forward like this, it makes me happy! When I was a kid, I watched the original Star Wars all the time, but I really latched on to some other films as I grew up, which I have since seen more times than I can count. So I may have to list a few films…. (I hope that’s okay!) If we’re talking about watching a film all the way through in one sitting, it may be Sunset Blvd that I’ve seen the most. However, there are a few other films that hold close seconds – Metropolis, Jaws, 2001: A Space Odyssey, Once Upon a Time in the West, Videodrome, Alien, Rear Window, and The Departed. It’s an eclectic mix I know, but they’re just so damn rewatchable, not to mention that most of them are on TV all the time.

TC: I’m currently finishing up post-production on another short film. It’s a comedy and completely different from Helio. We’re also in talks for a few feature films that we’re trying to get off the ground, including a feature film version of Helio, which would hopefully lead into a trilogy that’s a lose reimagining of Dante’s Divine Comedy, with the first film being a sci-fi rendition of The Inferno. 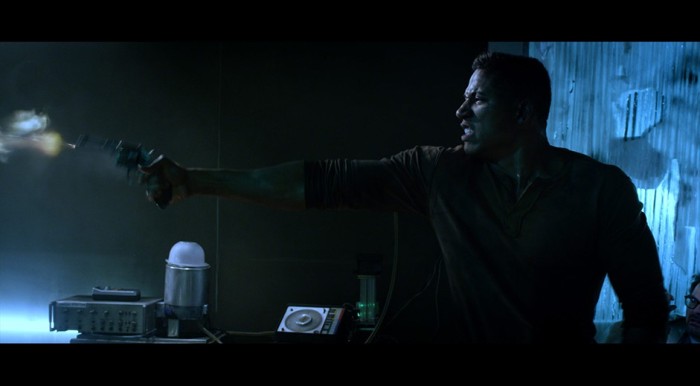