A production designer is the person responsible for the overall look of a film. They ave a key creative role in the creation of motion pictures and television.

What an honor it was to talk with the amazing Production Designer Michael Corenblith. His resume is filled with some of the best movies in the last 20 years, including: Saving Mr. Banks, The Campaign, Game Change, Dinner for Schmucks, The Blind Side, Frost/Nixon, Apollo 13.

Matthew Toffolo: You’ve worked as a Production Designer in 35 productions over the last 30 years. Are there one or two films that you’re most proud of?

Michael Corenblith: There are countless ways to measure my affection for all of these projects.  There have been so many valuable collaborators and shared experiences that each film has its own special place.  “Apollo 13” will always remain one of the most exciting, and I’m so pleased to see it aging so gracefully.  Other times the work that we do on a film can have a benefit of bringing a good cause to the public’s attention, as we were able to do with “Dolphin Tale” and the Clearwater Marine Aquarium,and now with “The Finest Hours,” and the Coast Guard boat maintained by the Orleans Historic Society.  After the release of “Saving Mr. Banks,” Disney fans enjoyed seeing Walt’s Office circa 1961, that The Disney Archives, after 50 years, have restored Walt’s office suite in the Animation Building to a remarkable effect.  So sometimes the thing you can be proudest of is accidentally doing some actual good in the world.

Matthew: What is a director looking for in a Production Designer?

Michael: Initially, a director is seeking a Partner who shares his passion for the project, and regards it from a perspective that adds visual continuities that help tell the story as a whole.  Good Directors are always seeking the better answer, and asking the better questions, and it’s during this interaction that the film begins to take shape.  Later on, a Director is looking for supportive team play from the Art Department, and good communication with the Costume Designer, Cinematographer,and their teams, ensuring that the shooting days are about performances rather than these Crafts.

Matthew: What is a Production Designer looking for in a director?

Michael: The Directors who I’m attracted to are gifted storytellers, with strong character and dialog skills.  Because of their storytelling orientation, they are enthusiastic about making the visuals work in a more orchestral way.  I’m looking for someone who is full of ideas, and then figuring out how to create an overall scheme that incorporates these individual ideas into a cohesive whole.

Matthew: When working on comedies, are your tones and styles different in comparison to working on dramas?

Michael: My philosophy is that comedies are best visually supported when the environs and decors create a plausible canvas for the comedic events to occur. In formulating a visual scheme for a film, it’s more important that the story’s entire arc be considered, and the audience be more involved with the comedic predicaments of our protagonists.  Sometimes, the screenplay will call for the Scenery to become part of the Physical Comedy, which seems to support this theory by not “telegraphing” the gag or stunt.  Other screenplays will call for the protagonist to interact with an unfamiliar or uncomfortable environment, and in this case I remain true to the overall arc, but increase the vividness of these new decors.

Photo: Dinner Scene in the comedy film Dinner for Schmucks (2010):

Matthew: You have worked on a lot of movies that were based on true stories. In fact, you just completed one that is about Ray Kroc, the owner of McDonalds. Do you enjoy the research process of re-creating historical times? How far can you go to stretch the “truth” in design for the sake of the story and themes that are being presented in the film? I’m sure it’s a fine line.

Michael: One of the great treats of being a production designer is the opportunity to explore such a variety of eras and remarkable true stories…..and meet people who brought great knowledge and insights either through their presence or their scholarship.  Films that stand out in this regard are “Apollo 13,” ”The Alamo,” “Saving Mr. Banks,” and recently, “The Finest Hours.”  Each of these films aimed not only toward archival re-creation, but also had to temper a finished look that communicated the film’s emotional truths.  Ray Kroc and the story of McDonald’s offered another wonderful opportunity to research something that is so fundamentally American, and then create a wonderful replica of the 1954 Golden Arches franchise.  But while being respectful of the archivists and historians, the fundamental idea is for the audience to experience the film’s real emotions and sense of place, even if it means measured and thoughtful deviation from some known historic truths. 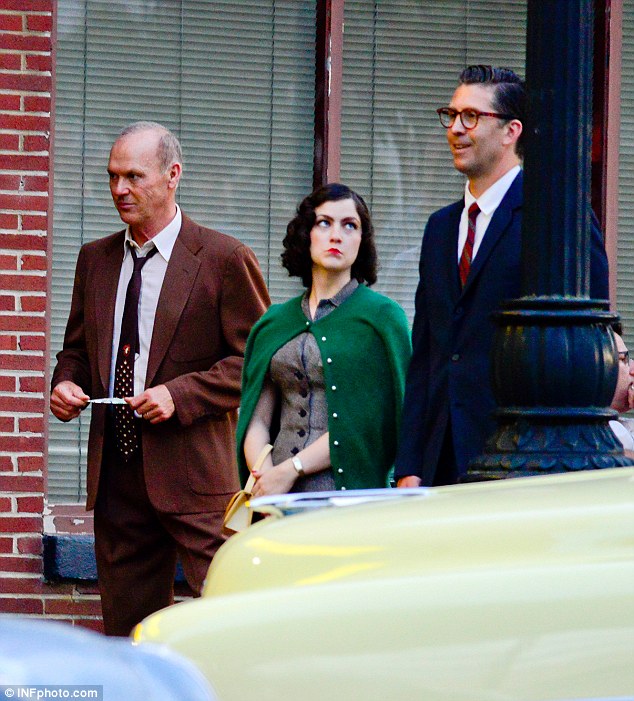 Matthew: You also like to work on political movies. In fact, you went back to back with director Jay Roach on Game Change (2012) to The Campaign (2013). Are you a political person yourself? How was it to re-create that infamous 2008 campaign?

Michael: Political films have always interested me, particularly Michel Ritchie’s “The Candidate,” which was really the first time that the confluence of Media and Celebrity and Politics came together in a modern way.  And in many ways, “Frost/Nixon” was an intensely political film that played out in a different arena.  “Game Change” and “The Campaign” were made more or less back to back, during the Republican primary season of 2011, so it was great to see the foibles in our screenplay occurring in real time on CNN.  McCain’s 2008 was an absolute blast to re-create, as it was so well branded, and so well documented.  The most interesting challenge was in re-creating the Vice Presidential debate with Joe Biden, which required great precision for the split screen between the archival footage and our new footage, but when we reached out for the drawings from the original debate, found them to be somewhat “classified,” and had to resort to a very deep bag of tricks to creating our matching set.

Matthew: I have a funny feeling that you and Jay will be back for Game Change 2 after this political season (and of course after the book is written). Are you looking forward to re-creating the campaign worlds of Hillary, Bernie, Donald, and Ted?

Michael: I’ve been a big fan of “Presidential Politics as a Contact Sport,” and enjoyed Mark Halperin and John Heilmann’s telling of the 2102 campaign, “Double Down.”  So yes, absolutely, I’d love to see what the Game Change team would bring to telling the story of this Campaign.

Matthew: How early do you come into pre-production before shooting starts? When do your hire and bring on the rest of your key team members?

Michael: Generally, in early pre-production, the location work has yet to begin in earnest, so my first priorities are getting the location scouting underway, and beginning to line up my team. I often have a couple of weeks to lay out a general scheme, and scout with the Director and Producers.  My department generally gets about the same number of pre-production weeks as the shooting schedule, so the Art Department Coordinator is the next hire, to set the table for the arrival of the Set Decorator and Art Director, followed by the Set Designers, and Graphic Designer.

Matthew: What percentage of the budget generally goes to the Art Department when working on a Hollywood film?

Michael: This is always going to be Situational in relationship to a lot of other moving parts within any individual project. The scripted locations also play a major role, as shooting in a high school or in a submarine mean very different budget allocations for the Art Department.

Matthew: What film, besides the ones you’ve worked on, have you seen the most in your life?

Michael: Without a doubt, Francis Ford Coppola’s “The Godfather,” with Kubrick’s “Dr. Strangelove,” and Mike Nichols’ “The Graduate” coming in distant silver and bronze.  All wonderful, complex, human stories, each with its own beautiful visual signature…..each designed by one of the greats of my generation…Dean Tavoularis, Ken Adam, and Richard Sylbert. Each film left a very lasting impression on my cinematic development.

Matthew: Do you have a Production Designer mentor?

Michael: I am blessed in having two gurus.  When I first had the opportunity to hear Richard Sylbert speak of the Craft of Production Design, his concepts and theories immediately resonated, and I suddenly understood that designing films could be so much more than simply reflecting what was already on the page.  Years later, I came upon the work of USC Professor, Bruce Block, and his book “The Visual Story: Seeing the Structure of Film, TV, and New Media.”  After hearing Bruce speak, I felt that he had brought order to a multitude of concepts that I’d been employing, and through his teachings could now employ them in a coordinated way.

Matthew: Do you have any advice to kids currently in high school or in university who want to be a Production Designer?

Michael: This is probably indicative of my generation being one of the last analog skill-based one, but in general my Old School Advice would be to develop some basic non-digital ways of conveying visual information.  Come to classroom with some ways to express your ideas that can be simple as chalk on a blackboard….and don’t require a laptop.