3:32 played to rave reviews at the October 2018 DRAMA Feedback Film Festival in Toronto.

Andres Passoni: My work is mainly focused in documentaries and I had never worked with actors. I wanted to work with Calu Rivero, an argentinean actress, and I had an idea of a character I thought she would feel related.

It took me almost a year to have the final script and then a year for the shooting and post-production.

A lot! but I think the biggest was to tell everything I wanted in 3 minutes 32 seconds.

That feedback is so important to inspire yourself and grow as a filmmaker.

Once I read an interview to a music producer stating that 3 minutes 32 seconds is the perfect length for a pop song. I’m a huge consumer of pop music, especially from female performers and thought it was a very interesting concept to develop a conflicted character and a short story with the same length.

The Birds by Alfred Hitchcock and La Mujer sin Cabeza by Lucrecia Martel, everytime I see them I discover something new about filmmaking and human nature.

It helps you to learn about distribution, find a lot of festivals in one place and it’s very friendly to use.

Ray of Light by Madonna, every time I listen to it makes me feel very creative.

I’m writing and developing different ideas but I still haven’t decided my next project. I’m curious what the future holds for me. 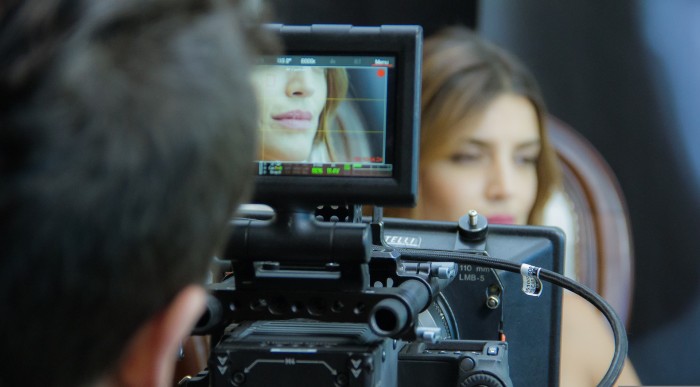 Andrés Passoni’s short film was the winner of Best Picture at the May 2016 Documentary Short Film Festival.

Andrés Passoni: I love animals and when I heard about greyhound races I instantly felt very attracted to immerse myself in this world. I thought it would be interesting and a challenge to share this controversial theme from a different point of view and I worked very hard to create a special experience while viewing it. I also thought this project would be a great growth for me as a filmmaker.

MT: From the idea to the finished product, how long did it take for you to make this film?

AP: It took me two years to finish it. I had specific images in my mind that I wanted to achieve and I also invested a lot of time in the montage and sound design. It was hard but I felt very proud after watching the final result.

MT: How would you describe your short film in two words!?

AP: I don’t know if it was an obstacle but it was difficult to choose which images would stay in the final product because I shot a lot of material that I think it’s beautiful, but then I wanted to select the ones I thought added a special value to the narrative of the film and what I was trying to communicate.

MT: What were your initial reactions when watching the Toronto audience talking about your film in the feedback video?

AP: It was very interesting to hear the different comments and reactions and I had a huge smile throughout the whole feedback video. What I specially liked about it is that everybody felt what I was trying to communicate, which is a great feeling.

Thank you for the opportunity to show my work!

AP: Two years ago in a family birthday an uncle started talking that he liked going to greyhound races, after hearing that, I thought it would be a very interesting world to portray, from the very beginning I knew I had to tell it from the dog’s point of view.

MT: What film have you seen the most in your life?

AP: Right now I’m finishing a script for another short film called 3:32, the theme it’s very different from what I’ve done but it shares my love for image and sound. In this case I’m also trying to build a particular experience around a character.

If everything goes according to what’s planned I’m shooting in September and I can’t wait to share it with all of you!