James Doh is one of the most sought after Storyboard Artists in the industry today. His imprint is on most of the top action movies in the last 15 years. In 2016 alone, he worked on “The Conjuring 2”, “Suicide Squad”, and “Star Trek Beyond”. He’s currently working on the upcoming blockbusters “Ghost in the Shell (2017”, “Aquaman (2018)”, and “The Predator (2018)”.

It was an honor to chat with him about his craft:

Matthew Toffolo: You have worked as a Storyboard Artist on over 30+ productions in the last 15 years. Do you have a favorite experience?

James Doh: It is sometimes rare to work with other storyboard artists, but through the years I’ve had the good fortune of having met some great colleagues.

That will probably be what I remember most from my work experience.

I’ve been fortunate to work with and meet some wonderful people.

MT: The film DRIVE (2011), is a very stylistic film, but not the conventional action/thriller film that you work on. How was your experience working on that film?

JD: That show had a great crew from the top down. It was a low budget production, but the crew were all top talents.

Credit to the EP for bringing together such a great team.

They wanted to bring me in for the car chases and sequences that required production prep.

When I read the script, it was one of those that you rarely get as a storyboard artist. Hossein Amini wrote a great screenplay.
I was also a fan of Nicolas Refn’s Pusher series of films, so I thought it was an exciting combination of material and director.

Interestingly, Nicolas was batting around different ideas for that elevator scene where Driver stomps the hitman to death. He had me board a different version that certainly was more brutal, but I like the elevator because it works so well for the entire sequence.

MT: How important is the creation of the storyboard to the production team for the action and fight scenes?

JD: Storyboards have several key roles. One of them is a communication tool for the production. It’s a visual script of those sequences.

It’s important to get the sequence down, to allow various departments to prep.

Boards are also important early on for budgeting, and to start developing what the sequences will look and feel like.

There are amazing fight and stunt choreographers, whose ideas we will integrate into the boards if they are involved at the time.

Other times, the boards are a jumping off point for the stunt/action team and a way for the director to convey his ideas on action sequences.

By the way, 2nd unit also can have their own storyboard artists to plan out their sequences too. Again, for communication, a drawing is a fundamental tool.

They are especially important for VFX intensive films, where costs and feasibility have to be looked at and planning is vital. Storyboards put everyone on the same page.

On Furious 7, we had the tragic death of Paul Walker and had to go into some very specific VFX planning to make the film work. There was some innovative work there and the storyboards were a part in planning those shots and sequences.

There are a multitude of uses for storyboards, so it can be a very powerful tool for directors to utilize.

MT: What’s the general working relationship and process between a storyboard artist and the director? How early do you meet before production begins?

JD: Very early. Many times we are the first ones on the show, months ahead of production many times. Often they circle back in post, and need storyboards once VFX gets into the nitty gritty of creating shots.

The working relationship is different with everyone but it’s really about developing the ideas or getting the boards to convey what the director is looking for.

MT: What are you looking for in a director?

JD: Good communication, convey vision, intent, style of the sequence. I’m looking to get as clear a vision as I can for the sequence.

Sometimes it’s wide open and they want you to run with it, and other times it’s very specific. Many times it falls somewhere in the middle.

I have been fortunate to work with directors that love to collaborate, encourage creative contributions, and understand the process of storyboarding.

MT: What does a director look for in a storyboard artist?

JD: To translate their ideas into a viable sequence. Directors look to you to visually lay out the sequence with creative solutions, in a way that they can shoot.

I also think it’s important that you have a good working relationship, because you can spend a lot of time hashing out ideas.

For storyboard artists, the fundamental key is visual storytelling.

You need to hash out the sequence and make it work for the director.

MT: What advice would you have for people who would like to do what you do for a living?

JD: Translating scripts to visual sequences can take a lot of time. If someone wants to become a storyboard artist, 1. Watch a lot of films. 2. Think about where you are placing the camera 3. Be able to draw anything at any angle. I know that sounds so broad, but if you learn to draw the human figure, you will be alright with everything else.

Most importantly, don’t be precious about your work. Things can and will change often for a multitude of reasons.

Storyboarding is a process. Sequences are developed. Things are culled, new ideas crafted, budgets change… you have to roll with that and adapt.

Did you see the Amityville flashback sequence in Conjuring 2? Look at the basics. Look at how he staged and told the story inside the house. He had a house, and a few actors to work with.

I would tell people to look at movies, and see how they tell the story. See what it takes to make simple things interesting.
Ask a lot of questions while you watch a film. It’s about decisions. What setups are you choosing and why?

Push yourself to improve. Always be a student of film and be a good listener.

MT: What movie have you watched the most times in your life?

Korean cinema is tremendous, and I would encourage anyone to give it a try.

So many films on heavy rotation in my library! Tony Scott’s work, Gareth Evans…

BTW, one of my favorite scenes of brilliant acting is Christopher Walken in Catch Me if You Can. The scene in the restaurant when his son (DiCaprio) tries to give him a Cadillac. That is just masterful. Every moment tells you a story, and within a couple minutes you deeply know this man. It’s amazing, most of it unspoken.

MT: Where did you grow up? How did you get into the film industry?

JD: I had always been interested in design and film.

My introduction to art in film was with my college teachers Tim Flattery and Warren Manser who are brilliant concept artists and designers in their own right.

They really sparked the possibility to enter the film business.

My first job was with RGA/LA (now Imaginary Forces) a main title company. I learned an appreciation for typography and graphic design there.

Then moved on to feature film storyboarding because that is where my passion was.

MT: Is there a type of film that you love to work on that you haven’t worked on yet?

And by the way, it’s not just directors but all the other departments you interact with as a storyboard artist. Those professionals are at the top of their respective fields.
You are working with the absolute hallmark people in every department and that’s really exciting to see.

The challenge to board for these directors is in pushing the creative solutions and coming up with ideas that work for their respective visions. 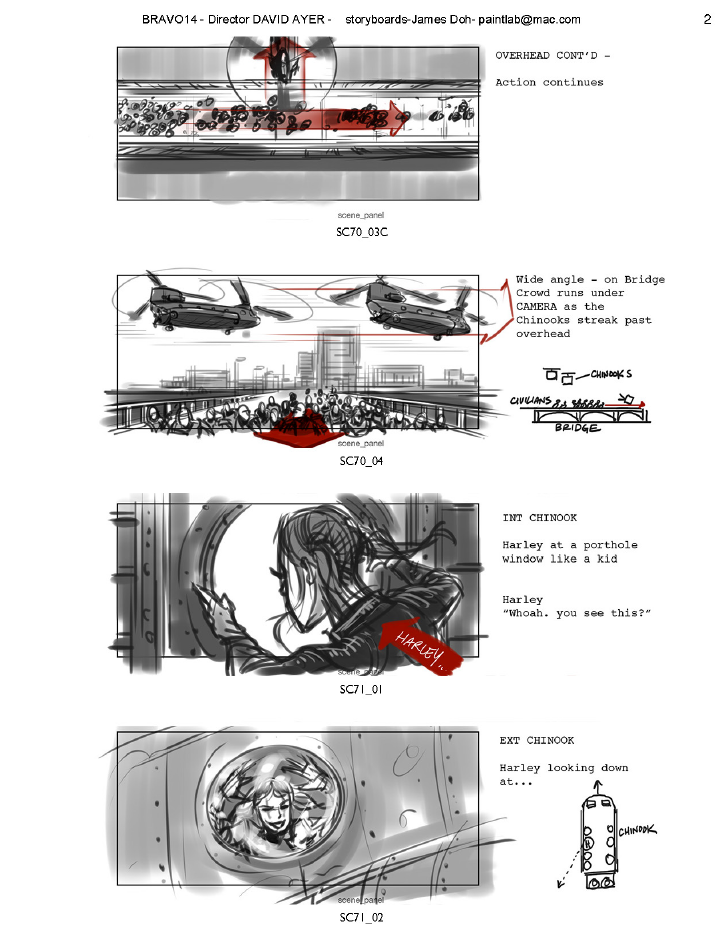 Interviewer Matthew Toffolo is currently the CEO of the WILDsound FEEDBACK Film & Writing Festival. The festival that showcases 10-20 screenplay and story readings performed by professional actors every month. And the FEEDBACK Monthly Festival held in downtown Toronto on the last Thursday of every single month. Go tohttp://www.wildsound.ca for more information and to submit your work to the festival.