Michael Simmonds is a wealth of knowledge when he chats about his love of cinematography. He is a man who is constantly looking into the future and only looking back when inspiration is needed. He is a rare talent who is able to move seamlessly from documentary to TV to feature films.  It was an honor to chat with him.

Matthew Toffolo: What are the biggest things you learn when you work on documentaries that help you when making live action feature films and TV shows?

Michael Simmonds: There are many ways to approach shooting a Verite documentary. Sometimes you need a complete and editable scene every ten minutes. Meaning, you are constantly getting CU’s, inserts and establishing shots over and over again, regardless of what is happening. Or you can approach a doc like you would going fishing–you stay back with the camera and drift around until something interesting happens and let that lead the way for the camera.

Shooting a documentary makes you figure out coverage really quickly. All storytelling needs to have shot size variation to show the audience what is “important”. Verite documentary is basically filming a live event. The people move around and interact with other people and space and you have to make visual sense out of it for the audience. In narrative you can use this technique by blocking a scene as an “event” and keeping the blocking of the actors “loose”. This works well in chaos scene with lots of people. The actors perform the “event” and the camera films the scene like a doc, meaning there is no formal shot list or “plan”.

MT: Out of all of the projects you’ve worked on, what film are you most proud of?

MS: I only focus and think about whatever I am currently prepping or shooting. I try my hardest and show up to set with all the energy and focus I can muster each and everyday. As for the final product, I often joke that I would enjoy filmmaking just as much even if the camera was never recording. The finished film is of little interest to me aside from a sense of curiosity…

As for “what of my work can I watch and enjoy”; that would be “Plastic Bag”. It’s a short film about the life of a plastic bag. It’s a lot of fun to watch and I have fond memories of making it. The filming of it involved lots of throwing bags into the air and shooting leaf blowers at them, it was ridiculous so we laughed a lot.

MT: You DP’d the entire 2nd season of Vice Principals. I heard that most scenes were improved by the actors. How is that experience working on a set where you don’t know what’s going to happen take after take?

MS: I don’t think most of the scene were improvised. It wasn’t like a Judd Apatow film where you can feel the dueling two camera set up and the actors riff off each other. VP had very tight scripts and David Gordon Green would create film level blocking. The actors definitely added to the dialgue, but not any more or less than other projects I have been involved with. On a comedy, even if the actors improvise, its in regards to dialogue and not their actual movement, so it does not effect me. I alwas operate with headphones on so I can hear the actors perfectly and I can anticipate their movement.

MT: Do you have a Director of Photography mentor?

MS: I would have and currently would want a DP mentor but unfortunately I never had one. Amir Naderi was a director I worked with early on who taught me about composition and framing. He has a very sharp eye and was always pushing for a perfect take. Ramin Bahrani and I would discuss story structure endlessly and I still read Alexander Mackendrick’s “on filmmaking” every year. Understanding story is the foundation to understanding how to film a scene.

I learn more and more about lighting on every job. In my opinion lights are the hardest medium to work with. They are like painting with water color paint. You never really know what they will do. There are so many variables that will effect the way they function in the photography.

MT: What do you look for in your director?

MS: I want a good collaborator in a director, someone who is not afraid of communication. Good ideas come from lots of ideas. Although a director needs a “vision” they also need to explore all possibilities in a scene. They must be a leader and exciting, but egoless. Their decision process should not be based on fear, which is rare. Most people make decisions based on fear, which makes for a weak film. Bold choices make good films.

MT: What do you think a director looks for in their cinematographer?

It’s a myth that directors alone choose a D.P. or make any big hiring decision alone. A director might push for someone they have worked with or they could advocate for someone they want to work with but all decisions usually have to go through a producer, financier or studio. Usually a director would be given a list of people to choose from… Of course on more “auteur” films this is not the case.

MT: Ideally, how much preparation do you like to do before you begin principle photography? Do you like working with storyboards?

MS: Prep depends on the scope of a film. Nerve needed lots of prep due to the logistics of the stunt sequences. You need a storyboard since so much of that work is a “cheat” and takes place in a “fictional” space. By fictional space I mean that the space as presented on the screen does not exist in the real world. For instance a snorkel lens shot that feels “inside” Dave Franco’s helmet does not need to be filmed on park ave south. A storyboard also lets you understand what shots need the actual actors opposed to the stunt people.

A good stunt sequence is a lots of micro stories that fold into each other and those have to be mapped out.

White Girl didn’t need any storyboards since the film didn’t require cheating any spaces or stunt sequences… the front door to the protagonists apartment was actually the real front door…
A film like white girl doesn’t even require a shot list. We would block out a scene and film it as a moving master and then do some pick up shots for specific moments. 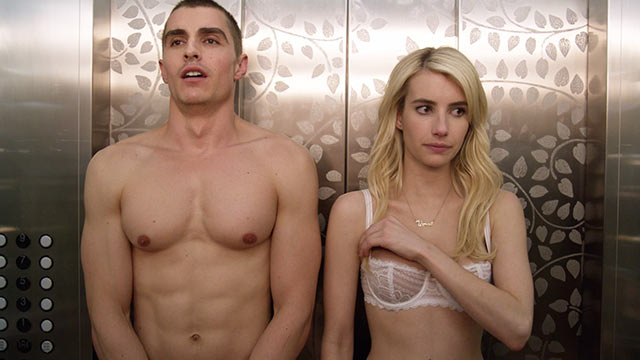 MT: Where do you see the future of camera/lighting technology in film?

MS: Although there is a romance and nostalgia for film negative, digital imaging has really improved lighting for movies. We are much more comfortable with underexposing now than in the past. Of course Savidis, Khondji and Willis did great underexposing and making bold lighting choices, but now you see modestly budgeted TV shows that look bold and interesting.

Focus pullers often use large HD monitors to pull focus which has allowed for super shallow depth of field that didn’t exist when I started out.

I have no idea where imaging will be in 10 years but the technology has been a mixed blessing with lots of advantages.

MT: What film, besides the ones you’ve worked on, have you seen the most times in your life?

MS: Probably something like RepoMan or something culty like the Warriors. Or maybe Wong Kar-Wai’s Fallen Angels since it was such a game changer in how movies looked. I am often going back to watch Danny Boyle’s work. I truly believe he is the best populist filmmaker working right now. He isn’t scared of technology and he is keeping up with how people currently read images…. Currently I’m not interested in filmmakers that are referencing the past.

MT: Where did you grow up? Did you always want to be a cinematographer?

Most filmmakers have a romantic story about a super 8 camera etc… My history wasn’t like that. My eyes have always been super sensitive to light. I get migraines in the sun and I was always particular about lighting in rooms, even at a young age. I was strict about when a household light would be turned on and which ones. I also liked to boss my friends around…. These qualities probably lead me to my profession.

Around the age of 18 I wanted to go into filmmaking. I started out at Hampshire college but there wasn’t enough of a focus on commercial filmmaking, so I transferred to a school of visual arts and started to focus on cinematography.

Before that I wanted to be in a rock band…. But I didn’t like staying up late and carrying equipment. Little did I know that cinematographers stay up all night and have a heavy camera on there shoulder all the time!

_____
Interviewer Matthew Toffolo is currently the CEO of the WILDsound FEEDBACK Film & Writing Festival. The festival that showcases 10-20 screenplay and story readings performed by professional actors every month. And the FEEDBACK Monthly Festival held in downtown Toronto on the last Thursday of every single month. Go towww.wildsound.ca for more information and to submit your work to the festival.