Ute Bergk answered the set of questions I emailed her on the airplane on her way to Budapest, Hungary to complete the television mini-series “Emerald City”. Based on the “Wizard of Oz” universe, Ute promises that the series is “going to be something else” and that director Tarsem Singh is a delight. Two months in Hungary and they are wrapped.

She was happy to answer these questions on the plane and send them my way. In fact, I might have this interview posted before she lands.

Matthew Toffolo: You were the Set Decorator on the action/comedy “Grimsby”, which is currently at a cinema near you. How was your working experience on that film?

Ute Bergk: Yes ‘Grimsby’ came out a few weeks ago. I have been working with Sasha BC before- we build the stage for ‘FunkyZeit’ in Berlin for him /for the movie ‘Bruno’. It’s was just an introduction to the madness of a comedy. Sasha is very mesmerising – it’s more like a life event working with him , really. ‘Grimsby’ was scripted like a feature film, but that didn’t mean anything. The writers were on set all the time and creatively made changes continuously. Now- in hindsight- I can say, that one needs to have quite a team in the background to serve the needs. There is a lot of running around! My experience- interesting but very stressful and full on speed!

MT: Is there a difference when doing set decoration on a comedy film in comparison to a straight up action or drama film?

Ute: Yes- I guess there is. Every comedy I have worked on is always reassuring the moment (of laughter) and rightfully so. But on film all has to be managed the same way like a drama / action pic. The Set Dec. Challenge with Sasha was to decorate cool as always but at the same time having in mind, that certain furniture or dressing actually have a ‘role’ too. A sofa needs to be big enough to walk on or a curtain strong enough to swing from.. 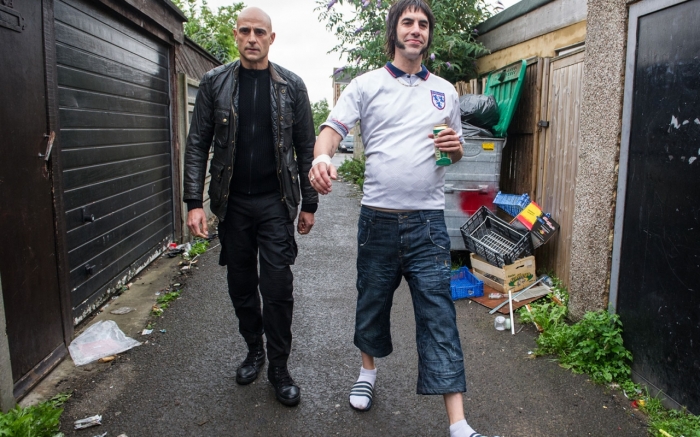 MT: How was the Batman Begins and The Dark Knight experience? You helped create a more grounded and unique comic book world that set the tone for this genre. When working on #2 specifically, did you know that you were going to be a part of such an iconic film?

Ute: Well, well – I am very thankful to have had the opportunity!

When we first arrived at the ‘stage’ where we build ‘Gotham City’ on “Batman Begins”, it took 15 minutes for the door to slide open. I was aware that this is going to be …big. But the process is the same ..you take your piece of chalk and start outlying the sets onto the stage floor. ..Here is we’re the monorail will cross, here it’s ‘leg’ , a little further down ( a few mins walk..) the entrance to the opera.. We walked a lot!

On #2 we mainly did all stunts and action sequences there – the ‘stage’ was big enough to allow that. Not to forget the iMax cameras zooming by on wires every now and than.

MT: “Enemy of the Gates” is such an underrated film as the production design felt so real, almost like we were in 1940s WWII Russia fighting off the Nazis. What are your memories working on that film? Was the entire Art Department shocked that you didn’t receive an Oscar nomination?

Ute: I am really glad you are asking me this! It’s a long way down on memory lane but this was the greatest experience so far. I was very early into my career and it just happened that I was asked to join the team. We shot it in Berlin and the former East Germany. The set was enormous! Well… I thought so being a youngster. But truly it was. It was the biggest movie in Germany at the time. The logistics required to make it happen were just ..thrilling ..I would say now. The whole art department worked together and I can not recall any ‘counterproductive activities’ amongst us. I developed a close bond to the Russian community and still maintain friendships from those days. The Designer Wolf Kroeger came up with these amazing designs all drawn on paper – sometime a drawing would be up to 4/5 meters long ..on a paper roll. We had to create Stalingrad , destroyed by the war and did a lot of research on bricks and rubble. Wolf insisted to have bricks from a special factory in Russia and so we had lorryloads after lorryloads coming in. Container full of rubble! I earned my nickname ‘rubble-queen’ there- and if I may go to question 10 from here- if you find it thrilling to find yourself in freezing conditions somewhere far from home trying to explain to a Russian speaking lorry-driver on overtime to dump his bricks carefully – I guess you would make a reasonable good member of the art department!

PHOTO: The grand set design in ENEMY AT THE GATES:

MT: Describe the working relationship between the Production Designer and Set Decorator?

Ute: The Designer works very close with the Director. The Decorator works very close with the Designer, but the roles are quite different, I’d say. The Designer has a passion to create using his vision. The Decorator depends more on actual facts than fiction. Is a decor ..available. Do we need to make? Fabricate? What are the practical lighting requirements ? In what I am doing now this has become quite a concept..as ‘Emerald City’ is lit by the ‘Two Moons..’ But generally the Decorator has to be quite ‘realistic’ at some point and the Designer occasionally has to compromise , which they normally don’t like doing.

MT: How soon before production begins does the Set Decorator begin working? What is your initial task?

Ute: At least 3 months prior to the shoot and not long after the Designer is on board.

Initial task? Doing the job with full passion and ability.

MT: What does the Art Department look for in their Production Designer?

Ute: Not always does the Art Department choose with whom to work. An Art Department sometimes can consist of a lot of people and I cannot answer on behalf of all those involved. For me the person I work closely with has to be artistic, visionary, funny, entertaining, always switched on and human. At the end of the day it’s just a movie.

MT: What does the Production Designer look for when working with their Set Decorator?

Ute: You have to ask a Production Designer this .

Ute: Movie seen the most- u mean more than once? Probably “Mulholland Drive” cause I tried to figure out the architecture (there is none..!)

After having worked on “13 hours” – I thought the movie “Timbuktu” is just wonderful, but I have only seen it once- the soundtrack in on my Spotify playlist!

MT: Do you have any advice for high school and university students who want to work in the Art Department in the film industry?

Ute: If you enjoy all things weird and wonderful you have found your space. But only experience can tell if you succeed. It’s competitive and not easy to break into – if there is no other place in the world for you than go for it. Just like the Giant in ‘BigFish’ – see if you like it.

____
Interviewer Matthew Toffolo is currently the CEO of the WILDsound FEEDBACK Film & Writing Festival. The festival that showcases 10-20 screenplay and story readings performed by professional actors every month. And the FEEDBACK Monthly Festival held in downtown Toronto on the last Thursday of every single month. Go to http://www.wildsound.ca for more information and to submit your work to the festival.