MAMMA was the winner of BEST PERFORMANCES at the January 2018 Under 5min. Film Festival.

Gonzalo Cotelo: I think almost every filmmaker is lured at a certain point with the idea of making a one shot film, and so was I. I also wanted to tell a simple and yet powerful story and play with the audience almost exclusively with visual narrative and camera work.

It was exactly one week during a stay in a summer film campus and traveling festival in Italy.

The blocking with the actors and timing of the events, as I wanted it to be intense and yet have a filmic pace.

It was amazing to see how people felt about the film exactly as I had planned it! the lack of subtitles, the camera work, the final reveal… it is a confirmation that all those crazy ideas weren’t that crazy after all.

I love a film called “Nine Lives” by Rodrigo García, nine short stories about female characters shot in 9 continuous long shots. And the first one features a pregnant woman, played by Robin Wright, in a supermarket. That was the first inspiration for the story, the first primordial image that I later developed into a different path when I decided that my character will be in a close up during the whole film, and the camera would never abandon her until the very last moment revealing the main piece of information that I decided to withhold from the audience. I also love an Ukranian film called “The Tribe”, acted entirely on sign language and without any subtitles, which I thought was simple and brilliant, it really forces the audience to pay attention. And I knew it would also help the public to connect with the main character and feel as lost as she feels not understanding what is going on between the two hitmen.

Definitely one of the original Star Wars trilogy films, I couldn’t tell you which one though (probably Return of the Jedi)

It is indeed very useful, particularly now with the number of films being made and film festivals being held everywhere across the world. The structure and layout of the website simplifies the whole process.

A Beatles song for sure, I’d go for “Lucy in the sky with Diamonds”.

Yeah, a new one, a bit longer than five minutes hopefully. I live and work in Kuwait at the moment but I´d like to go back to Spain in summer to write and start producing again, I miss it! 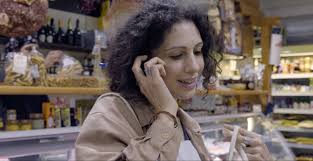