The role of an Assistant Director – 1st AD on a film includes tracking daily progress against the filming production schedule, arranging logistics, preparing daily call sheets, checking cast and crew, and maintaining order on the set.

John McKeown has worked in the AD department, mainly as a 1st AD, on over 40+ productions in the last 20 years. He is a fountain of knowledge, which is evident when reading this interview. 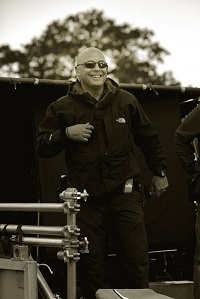 Matthew Toffolo: In your 20+ year career, do you have a favorite and/or memorable experience?

John McKeown: Those 20+ years went by in a flash!

I’ve seen a lot of sunrises and sunsets around the world and I have my job to thank for that.

Shooting in India was a truly memorable experience. It’s a place I hope to return to.

I’ve been lucky enough to work on action movies, dramas, comedies and most things in between.

Traveling to distant countries, seeing behind the scenes of cities, places and other peoples lives is a real privilege.

When I really think about it the thing that I value the most is the people I’ve worked with, both in front of and behind the camera. Most of my closest friends are people I have worked with. Spending your working life surrounded by people who are enthusiastic and talented is a real blessing and not to be taken for granted.

MT: In a typical Hollywood production, how many weeks before shooting does the 1st AD come aboard the film?

JMK: It varies. Depending on the project the AD can be in prep for many months or as little as 3 weeks.

I usually start a couple of weeks after the director and a week or two before the DP.

MT: When setting the schedule for the production, what is the fine line between what is most logical and cost saving to what schedule has the best chance to make the best film?

Knowing when you can economize on a given scene or shooting day in order to allocate more resources to another part of the script is what the schedule is all about.

Achieving that delicate balance is the skill of a good AD. Talking to the director about what is vital to their story telling process and what they are most passionate about is the starting point of prep for me.

Working closely with the director and producers to bridge the gap that sometimes exists is a big part of the AD’s job.

I want to go into day one of shooting with a schedule that the director, the producers and I agree gives us the best opportunity to enter post production feeling great about what we got during the shoot.

MT: What are the key qualities to being a great 1st AD?

JMK: You’d have to ask one!

I can tell you that the qualities I look for in a 2nd AD apply to the 1st AD as well.

– A calm unflappable personality under extreme pressure
– Real attention to detail
– The ability to plan ahead and think on your feet if the plan falls apart
– The grit to do a great job when they are sick / exhausted / just had their car stolen / got yelled at by someone above the line or any number of other things that would put a regular person off their game
– Sense of humor – essential!

MT: How does the 1st AD gain the respect of the crew on the first day to set the tone of the production?

JMK: I try to set the tone during prep and at the production meeting.

I treat everyone with respect and I expect them to do the same.

On the first day at the safety meeting I make it clear that we are a team, that everyone needs to play their part and that I am always available to any member of the crew who needs me.

I make the assumption that they are there to do the best job they can.

In the rare case that we hit a speed bump because someone either can’t or won’t deliver what is expected of them I try to resolve the situation in private away from the set.

MT: Is there is a key difference when you’re a 1st AD on productions of an action film in comparison to a drama?

JMK: In large action sequences it is much more about logistics, safety and planning with the stunt team and special FX crew.

Often the angles are story boarded and detailed shot lists are created and then scheduled.

Running the set is always about making sure that everyone knows what’s happening right now and then what is happening next up.

Drama is a different discipline. Creating the right environment on the set for the cast to work with the director is the top priority.

Dramatic scenes can seem simple – two people in a room? What could go wrong? A surprising amount!

I try to remove all of the distractions from the set so that the director can work with the cast and get the best performances.

A combination of intense drama and extreme stunts? That’s when it gets really interesting!

MT: If the day or entire schedule goes into overtime, does the 1st AD carry the most blame?

JMK: Only if he/she is the cause of the overtime!

There is a lot the AD can do to make sure that things run efficiently.

Proper planning in prep is essential (The 3 Ps!).

Having a plan B, C and on some days plan D is also something an experienced AD is used to.

All that being said there are some things that you can never predict. Weather can be forecast but change in a moment, a cast or crew member can have a bad day for any number of reasons, equipment can fail etc.

My personal rule is this.

If something happens (however unlikely it was to occur) that I could in any way have expected, predicted or prevented then I carry the blame. If there was no way to know ahead of time that disaster would strike then I accept the new deal and do everything I can to move past it and get us back on track – the expression “It’s not my fault but it is my problem” comes into play here. The trick is knowing the difference!

MT: What is a director mostly looking for in a 1st AD?

JMK: Very much depends on the director.

Some want a drill sergeant, some want a very low profile AD. Most want a combination of skills and experience that the AD can bring to the ever changing circumstances on a set.

I always talk to a director when we first meet and ask them how they like the set to run. In my experience a good AD is really a chameleon, drill sergeant, advisor, morale booster on the tough days. Most of all I think the AD is there to get whatever the director sees in their head onto the screen.

MT: What is a 1st AD mainly looking for in a director?

JMK: For me it’s collaboration.

The best experiences I have had are when the director the DP and the AD are all in sync and pulling for the same goal.

Sometimes the director and the DP are a creative team and see the AD and indeed “production” as a barrier to getting their vision made.

This is really unfortunate but it is understandable.

A director I love once told me that he came to work everyday with a “bucket of diamonds” that were his ideas for how to shoot that days work. He told me that at the end of the day if all his diamonds had been lost (killed by production in his view) and all he had left was the handle of the bucket he considered that a good day!

The best directors include all the key departments in the plan and the end result is always better. I think the secret to success is to hire smart motivated people in the key crew positions and then let them really do what they are best at.
As a director you have the final say as to whether an idea brought to you is in the movie but having a whole team of talented people offer up ideas is a gold mine of opportunities.

JMK: I was lucky enough to have two. Nael Abbas & Jon Older. Both top AD’s in the UK and the two people who put me on the right path at the start of my career.

Nael gave me my first break and got me into TV. I worked as a PA and then 2nd 2nd for both Nael & Jon.

I moved my way up to 2nd AD working for both of them on multiple projects. Jon Older gave me my very first job as a 1st AD. He was moving up to direct and asked me to run the set for him. I’m very grateful to them both.

JMK: Jaws. I pray they never remake it as it is the perfect film.

____
Interviewer Matthew Toffolo is currently the CEO of the WILDsound FEEDBACK Film & Writing Festival. The festival that showcases 10-20 screenplay and story readings performed by professional actors every month. And the FEEDBACK Monthly Festival held in downtown Toronto on the last Thursday of every single month. Go tohttp://www.wildsound.ca for more information and to submit your work to the festival.