THE WEB OPERA played to rave reviews at the February 2020 Music & Dance Festival in Los Angeles.

Michael Roth: Two things, really. First, aesthetic and somewhat practical: whenever I’ve met a writer over the past 10 years or so who’s wanted to collaborate on an opera or music theatre piece — anything like that, even if the idea is a good one — I’ve always felt obliged to state what’s almost obvious: it’s hard, once you get going, to know if it will ever really exist as a fully produced thing. It’s a lot of work and takes a lot of money, and you don’t know where you might be heading and if you will ever have it onstage fully realised and — sometimes just as important — get more than one performance.That’s not a reason to not do something, just an assessment. But I’ve suggested as an alternative that making a film, especially nowadays, is very much possible. The means of production, so to speak, are well within reach; the amount of musical creation you can do digitally is pretty great; and an enormous new music/opera house does exist that’s accessible to all: the internet.No matter what happens, the result can be posted online, sounding as one wishes it to sound, looking like what you might want it to be — to exist as we wish it to exist. And it’s not a show that closes on Sunday afternoon. There might not be any ‘box office’ to speak of, but the work will be posted as long as one cares to have it there.If creating the work is paramount, you can create it — as I tried with The Web Opera — and have it exist for all to see. And that is something. Second, and more important, as it clearly did powerfully move me to compose and produce it, was [the real musician’s] story and the tragic circumstances of his death — and accordingly, to make all more aware of cyber abuse and cyberbullying, and to fight it however possible.

We started working on the script sometime before 2014, I started composing the score in mid-2014, and we launched in January 2019 – so including the writing, about 5 years so far.

– Time, money, scheduling, etc- just getting together bit by bit, a lot of perseverance –

Frankly, very pleased – that the first reaction to the film after the screening was “I think THE WEB OPERA is pretty brilliant … ” well that’s an awfully nice thing to hear, and i did appreciate that and the other very kind responses.

– Honestly, I’ve never been a part of the film festival world until now, so have learned a lot this past year – so I think FilmFreeway works fine and makes it all clear and relatively easy – after all, it’s led to being a part of your festival – and being an official selection at 14 festivals total.

– Next is Episode 4 of THE WEB OPERA, hopefully will be done composing it by early fall, and hopefully filmed just after the turn of the year — that and several theatre projects, including new music/theatre to be premiered at the Guthrie Theatre – and music directing/orchestrating a new concert version of RANDY NEWMAN’S FAUST . 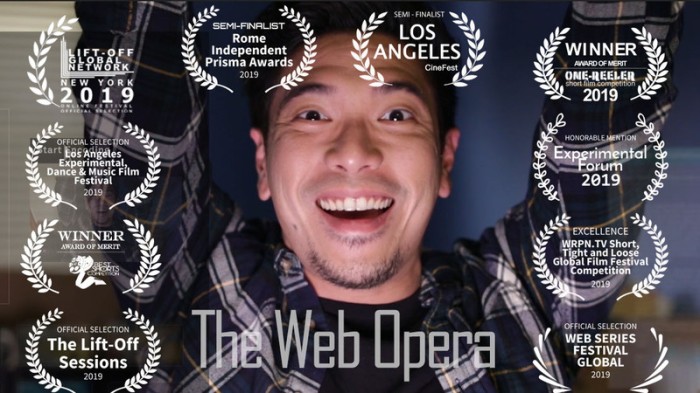 One thought on “Interview with Composer Michael Roth (THE WEB OPERA)”