In was an honor chatting with with extremely talented artist Luciano Capozzi about the craft and art of Costume Designing.

Matthew Toffolo: Where were you born and raised? Was wardrobe something you were always passionate about? Was “working in the movies” something you dreamed to doing one day?

Luciano Capozzi: I was born in Marino, a small town just outside Rome. I think that as a child, I was immediately interested in show business (laughter)…I always loved everything that had to do with dance, songs, and drawing…it’s for this reason that after my primary school I chose an institute of arts.

It was just in the 80’s (the years of the best success of the “Made in Italy”) when many young boys like me dreamed of becoming a stylist. In those years I was designing jewelry and immediately I realized that it was much more intriguing for me to design accessories thinking about the different types of people that would be wearing them. In my mind i think that my love for costumes was born in those years.

In fact, I loved studying the different social types of people, the various psychological personalities, and to understanding what kind of jewelry could best represent them.

After having completed my studies at the State Institute of Art in Rome in 1986, I took part in a Costume Design competition and from 300 applicants, I was one of 15 that were selected for the first ever design course to be given by Giulia Mafai, a famous Italian Costume Designer

Is there is film/TV show or two that you’ve worked on that you’re most proud of?

I always approach my work with the same enthusiasm and with the same passion, whether it’s a film for the cinema or a long television series … obviously there are projects that I’m particularly attached to…among these, my first international film was an Italian-Spanish co-production directed by the Spanish director Antonio Hernandez: LOS BORGIA a 2006 film that gave me a lot of satisfaction. I won several international awards thanks to it but I like to remember it especially for the synergy that was created on that set between the various departments. Perhaps for the first time, I had the feeling of how much my costumes were loved, appreciated and valued…it is something very important for a costume designer.

Another project that I love to remember is a television project: TITANIC BLOOD AND STEEL directed by Ciaran Donnely. Also in this case the right synergy between the director and the different departments gave a good result, in fact, the series was considered the best in Europe in that year. It is a clear demonstration of how important teamwork is. I like to think of my work as if it is the performance of a good first violin, in the performance of a larger orchestral work. Especially in these two works I think my style appears, with my personal use of colors and fabric textures, to talk about different characters in different eras.

What type of film (genre, setting etc..) would you love to do costumes on that you haven’t done yet?

I have so many desires…first of all I would like to go back and to tell a story set from the 40’s and 50’s … a Biopic or maybe a film based on a work by Tennesse Williams…this last one would really be one of my dreams…but also a musical, even contemporary, while at the theater I have had several opportunities to try my hand at this genre, I have not yet done with it in the cinema or on television.So…I’m ready to start!

Describe the process of a typical production. How early do you get hired in pre-production? Do you work and report to the Production Designer? Is your wardrobe budget already set in stone by the time you begin your first day?

In general I am contacted for the various proposals by my agency or directly by the producer, of which I immediately get to know some important info…synopsis, setting, duration of the film; once my availability is verified, the first contacts start with the production for a short presentation and then immediately after with the director with whom i immediately start talking about the film.Only after getting acquainted with this last one, i will go back to talk with the production about the budget, and to understand which are the parameters in which we must move our work. Generally for a medium-budget film the preparation is 5 weeks while for a 12-episode TV series it is between 8/10 weeks.

As I already mentioned, the collaboration between departments, with the DP and the Art Director is extremely important to obtain a real good result.

Usually after the first production’s meeting in which the parameters of references are defined, we regularly compare ourselves during the shot.

What personality trait do you look for when hiring your assistants?

Without question people who are able to be as empathetic, artistically sensitive and generous at work as I am. I could never work, with people who do not live with a great passion.

I have been working with two wonderful assistants for some years, Paola Angelini and Mirjana Panovski. With them I have had the opportunity to create a real and proper team, which I jokingly refer to as a “happy war machine”.

What film have you seen the most times in your life?

Maybe Snow White and Wings of Desire, but it ‘s difficult to answer. There are so many movies from the heart that I love to see again for pleasure or because it is the source of inspiration for my work. My personal video library has more than 800 titles. So let’s say…if I have had to leave for the mo’on, I would certainly take at least another 5 titles:
Rose tatoo
Death in Venice
Blade Runner
Bread love and Fantasy
The Draughtsman’s Contract

Besides wardrobe, what else are you passionate about?

Definitely traveling…but not necessarily for exotic places or faraway destinations…I’m fascinated by the idea of ​​a journey in places different from these i use to see, and to appreciate new things…even during the journeys, however, one of the first things I look for are the markets, whether they are modern or antique…they are places where you can immediately tune in with the colors, the flavors and the locals and so naturally to perceive their costumes.

What advice do you have for high school or university students who are looking to work in the Costume Department in the movie industry?

It is perhaps the most complex question…I would advise them to be truly receptive to everything that happens around them and to remember that our work is a job where we bring all of ourselves. I would remind them that each of us has a personal palette of ‘colors’. It is good to understand one’s own and learn how to use it 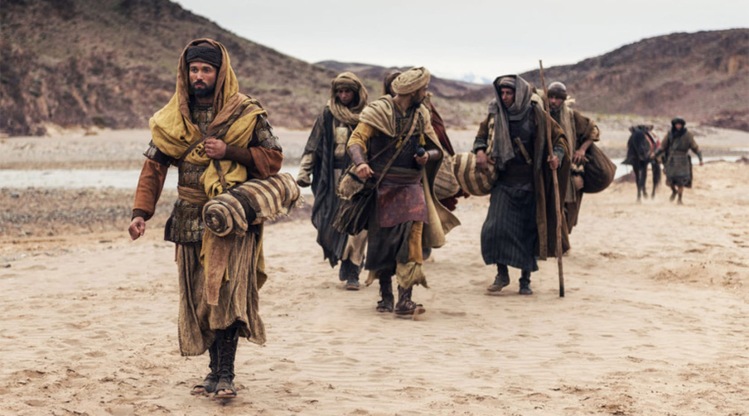